How To Connect CU BU and VVPAT

VVPAT is a machine that is used in elections to verify that the citizen’s vote has been correctly placed. VVPAT means Voter Verifiable Paper Audit Trail. In times of political mudslinging about EVM tampering, a paper trail ensures that voter faith remains intact, strengthening participatory democracy.

The VVPAT machine gives instant feedback to the voter, through a printed slip. Essentially, after a voter presses the button confirming their vote for their chosen candidate or NOTA, the VVPAT machine prints a slip containing the name of the candidate and the corresponding election symbol and automatically drops it in a sealed box. 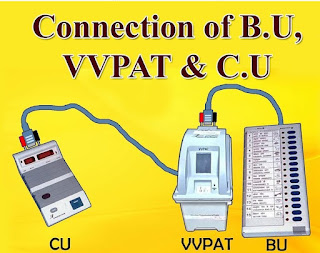 How the VVPAT work?

• The voting in India is done using the Electronic Voting Machine (EVM) that is designed with two units: the control unit and the balloting unit.

• The balloting unit of the machine has a list of candidate names and party symbols with a blue button next to it. The voter can press the button next to the candidate’s name they wish to vote for.

• When the voter casts the vote on the EVM, printer-like VVPAT apparatus linked to the EVM generates a slip showing serial number, name and symbol of the candidate to whom the vote was made.

• With this slip, the voter can verify his casted vote.

• This VVPAT slip is displayed for 7 seconds before it’s automatically cut.

• The slip, once viewed, is cut and dropped into the drop box in the VVPAT machine and a beep will be heard.

A Voter Verifiable Paper Audit Trail or VVPAT machine is used during the polling process to confirm that the vote cast by any voter goes to the correct candidate/symbol.

It is an independent system attached with an Electronic Voting Machine (EVM) that allows the voters to verify that their votes are cast as intended.

After a voter presses the button on the EVM against the chosen candidate, the VVPAT prints a slip containing name of the candidate and the election symbol and drops it automatically into a sealed box. The machines give the chance for the voter to verify their vote. The machine is placed in a glass case in a way that only the voter can see it. The slip is displayed to the voter for seven seconds after which the VVPAT machine cuts it and drops in into the storage box with a beep. The machines can be accessed, though, by the polling officials and not by the voter.